Animals will never forget what you’ve done for them!

Animals, unlike humans, will never forget what you’ve done for them. This is proven many times before, and here is another story that testifies about animals’ love and loyalty.

It doesn’t matter how long time passed since the separation, it can be weeks, months or even years, because animals are uniquely capable to recognize someone who has shown them compassion, love and kindness in the past.

My first video to witness this incredible reaction of an animal meeting its caretaker after a long time was of a dog that had been lost then found again and returned to his owners. However, this is the first time to see not one but two lions meeting the woman who’s been taking care of them 7 years ago and then reacting in such never seen way to meeting her after long years.

Just watch the encounter in the video below and I promise you it will stir feelings.

According to British paper the Daily Mirror, a woman had adopted two abandoned lions 7 years ago. However, as they grew she couldn’t take care of them anymore, and so they were placed in a zoo in Switzerland.

The wild cats were later moved to a specialist lion park in Slovakia, where this amazing reunion takes place. 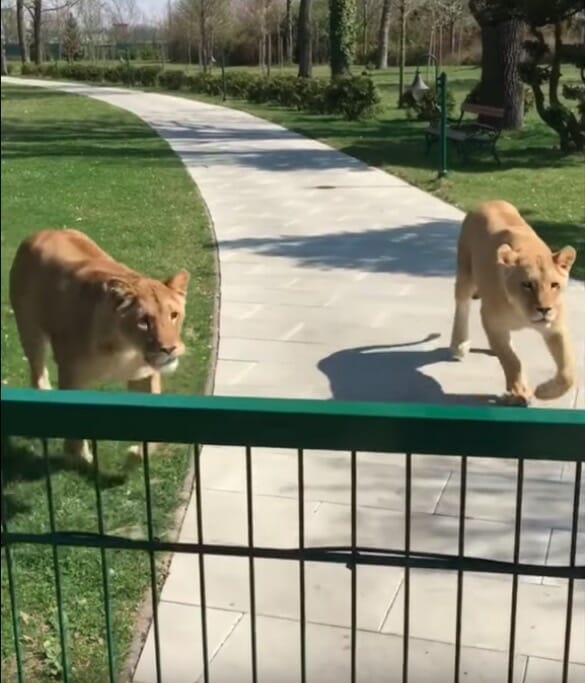 No one could expect the reaction these two lions would give upon seeing the woman. Obviously, it’s a nervous moment as the big cats approach quickly the gate.

But then watch what happens when the pair of them jump up at the gate and recognise a familiar face.

This video is to disapprove anyone who says that animals don’t have feelings.

What an amazing and special moment to see – true love never fails to disappoint.

Feel free to share this lovely clip with all your animal loving friends.

A Monkey Adopts A Little Puppy, Defends It From Stray Dogs And Acts Like Its Natural Parent

People Find Dog Living In The Dirt After His Family Moves...

Paralyzed Puppy Dumped Outside City To D.ie, Drags Herself For Miles...

Sea Lion Flops On To California Road To Nap And Stop...