The Aussiedoodle is the super-clever hybrid produced by crossing the Poodle with the Australian Shepherd. Both parent breeds are renowned for their intelligence, and this is the outstanding characteristic that comes through in their pups. An Aussiedoodle can almost read its owner’s mind, which can be both a blessing and a curse! These are also extremely active dogs, and this combination of intellect and energy can be a recipe for bad behaviour without adequate stimulation and companionship.

The ideal home for this cross-breed is with an active family, with at least one person in the house throughout the day who is willing to go for long walks both morning and evening. From the Aussiedoodle’s viewpoint, the presence of children in the home is a major bonus, as this is a very playful and affectionate hybrid that lives for cuddles and games. 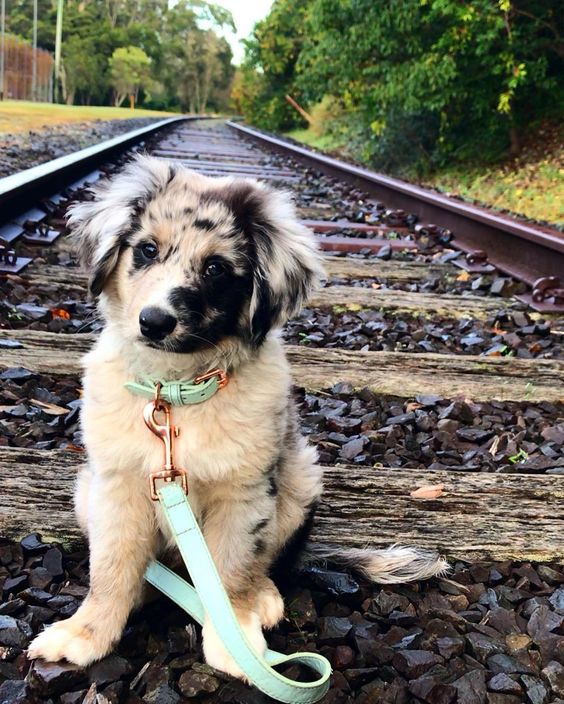 Because either the Standard or Miniature Poodle can be used in the breeding, the Aussiedoodle’s size is very variable. So too is the colour of its coat, and the complex rearrangement of the Australian Shepherd’s and Poodle’s many colour variations means that no two of their pups are ever likely to look the same. Rather than attempting to standardise appearance, Aussiedoodle breeders look to bring its wonderful temperamental and intellectual qualities to the fore.

Despite being a hybrid, there are several health conditions that can be encountered, some of which the parents should be screened for before breeding. Anyone thinking of buying a cross-bred puppy should research the health of the parents just as carefully as though they were buying one of the pedigree breeds. The Aussiedoodle has an average life expectancy of 10–12 years. 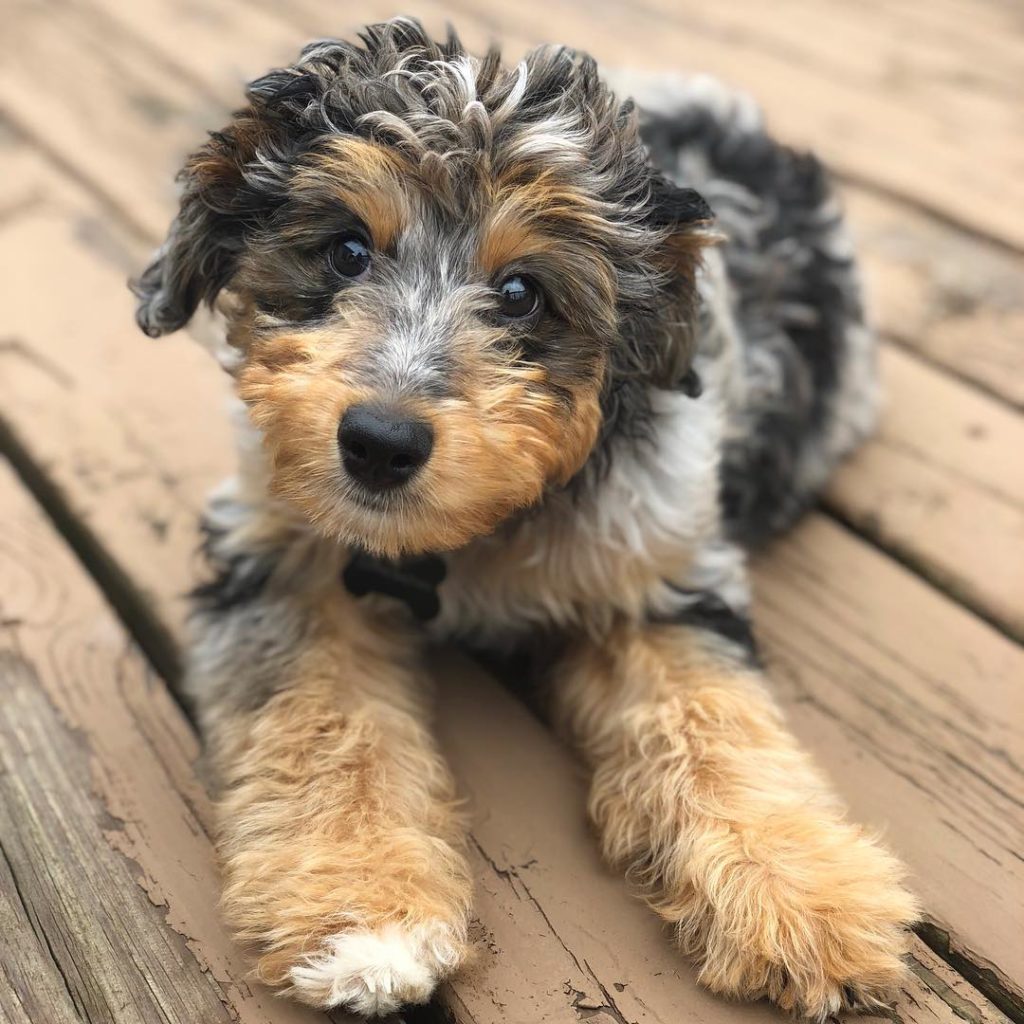 Somewhat confusingly, the Australian Shepherd has very little connection with Australia, but is a very popular companion dog in the United States, where it was developed as a working dog. It is exceptionally clever, and highly energetic, and demands a committed owner with the necessary time and energy to devote to training and exercise. Similarly, the Poodle has a reputation as one of the most clever breeds, and can also be a very active and excitable dog, so it should come as no surprise that the crossing of these two breeds produces pups with predictable traits. Apart from its smarts, the main reason for the Poodle being used in so many of the “designer dog” lines is its low-shedding coat, and the first breeders of the Aussiedoodle clearly had this in mind for their puppies.

However, all cross-breeding relies heavily on luck, and a good proportion of Aussiedoodles can be expected to more resemble the Australian Shepherd parent, and may shed a reasonable amount – something prospective owners should always bear in mind. Generally speaking, matings involve Poodle fathers and Aussie mothers in order to avoid birthing difficulties, although a Standard Poodle bitch could reasonably be expected to deliver these cross-bred pups without great difficulty. Multi-generational breeding is rare, meaning two pedigrees are normally crossed, rather than practicing hybrid-to-hybrid breeding. Although the Aussiedoodle has burst onto the scene only in the last ten years or so, it appears to be making a big impression, and is certainly set to become one of the most popular designer breeds in the years to come. 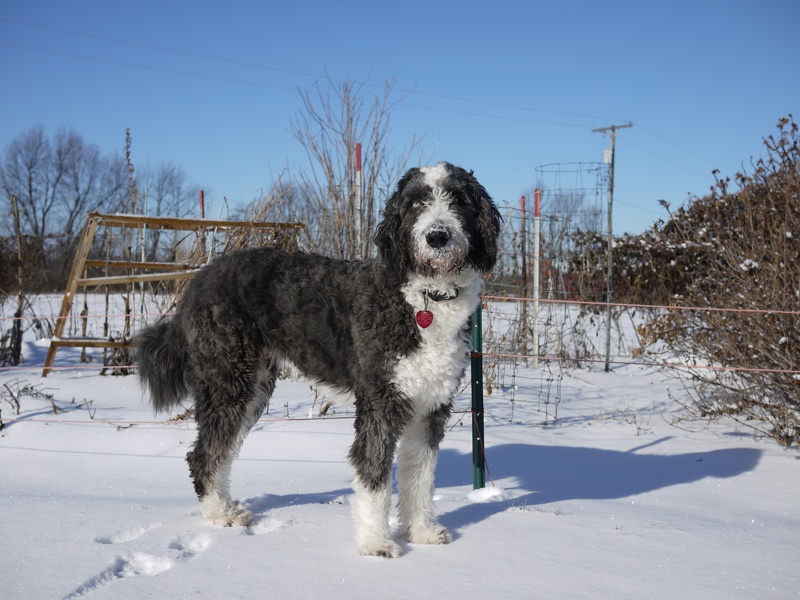 The mould is broken with the birth of each and every Aussiedoodle, as they can come in a bewildering array of sizes and colours. Not alone that, but the quality of the coat can also differ a lot, even between pups in an individual litter. Most have wavy hair that is somewhere between the straight and tightly curled coats of the two parents, but individuals can fall anywhere on the curliness spectrum! Aussiedoodles bred from Miniature Poodles may be as little as 30 cm (12 in) tall, and weigh around 10 kg (22 lb), being fairly fine-boned and lithe, while Standard Poodles tend to produce hybrid pups between 24 and 28 kg (53–62 lb) that can be as tall as 56 cm (22 in). Larger Aussiedoodles can have quite broad, sturdy torsos and backs, while their smaller cousins are more lightly built, though not delicate.

Few other dogs can sport as many different colour combinations, with the pattern of colouration being almost as variable. Among the commonly recognised forms are: 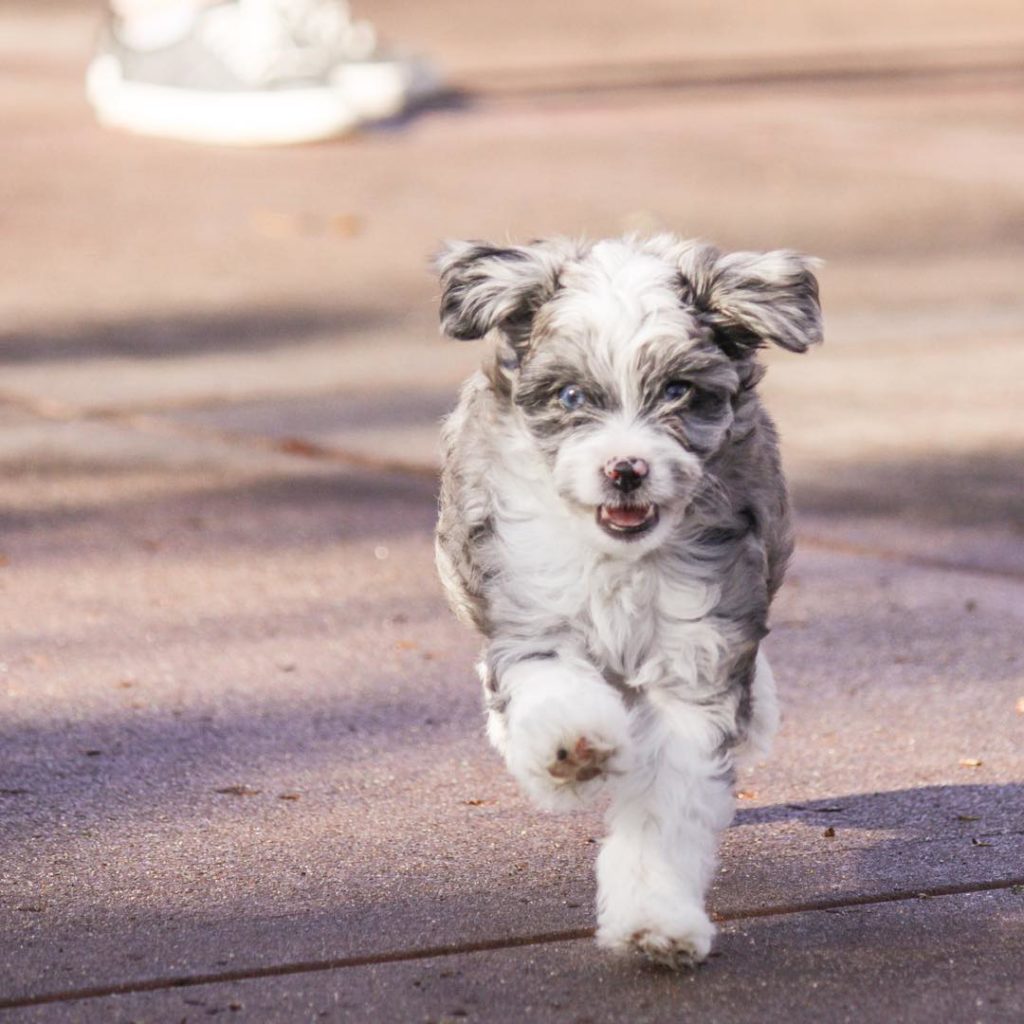 One of the joys of seeing the emergence of this and other hybrids is the natural variation in their appearance. Freed from the confines of a rigid breed standard, breeders can concentrate on what makes their dogs unique, rather than aiming to keep them all the same.

Aussiedoodles are cheerful, enthusiastic dogs with bundles of energy. They are extremely focused on their family, and need to be indoors and to feel included at all times. They have no tolerance for boredom or isolation, and will quickly become destructive or hyperactive if ignored or left alone for long periods, which is understandable given that they have the intelligence of a young child. Speaking of children, this hybrid is a perfect choice for families with kids. It has virtually no aggressive tendencies, and is also usually very accepting of, and gentle with, small pets of any species. 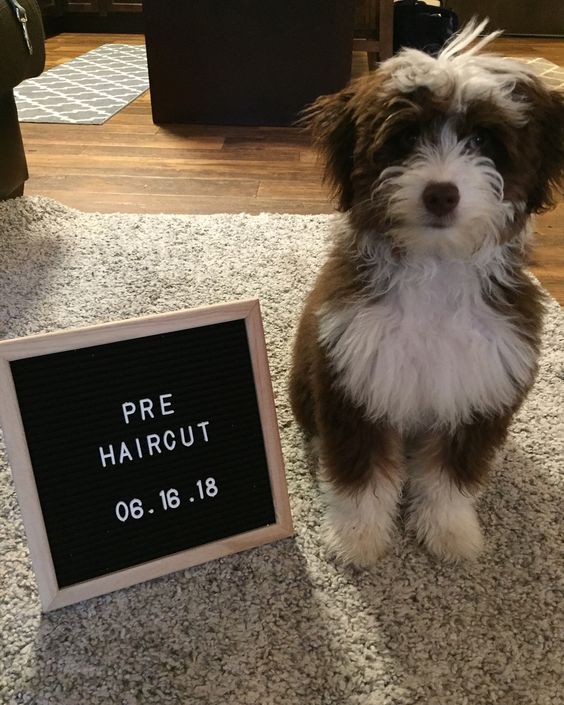 Even for the most inexperienced of owners, training an Aussiedoodle should prove more of a pleasure than a challenge. These dogs love to learn, and will begin to understand even quite complex commands within just a few repetitions. With one parent having a very strong working background, Aussiedoodles often benefit from being given jobs to do; carrying groceries, retrieving mail, picking up laundry – they are limited only by the owner’s imagination, and will be all the happier for being kept busy.

However, another hangover from their Australian Shepherd heritage is the urge to herd, which can be quite strong. Owners should be vigilant to the dog trying to round up pets, children, or even the adults themselves by encircling them and nipping at their ankles. This should not be misinterpreted as aggression, it is simply a very strong instinct in the Australian Shepherd breed, but it cannot be tolerated in a pet. At the first sign of such behaviour, the dog should be given an instruction to sit, or otherwise distracted. As in everything else it learns, the Aussiedoodle usually picks up on the desired behaviour pretty quickly. 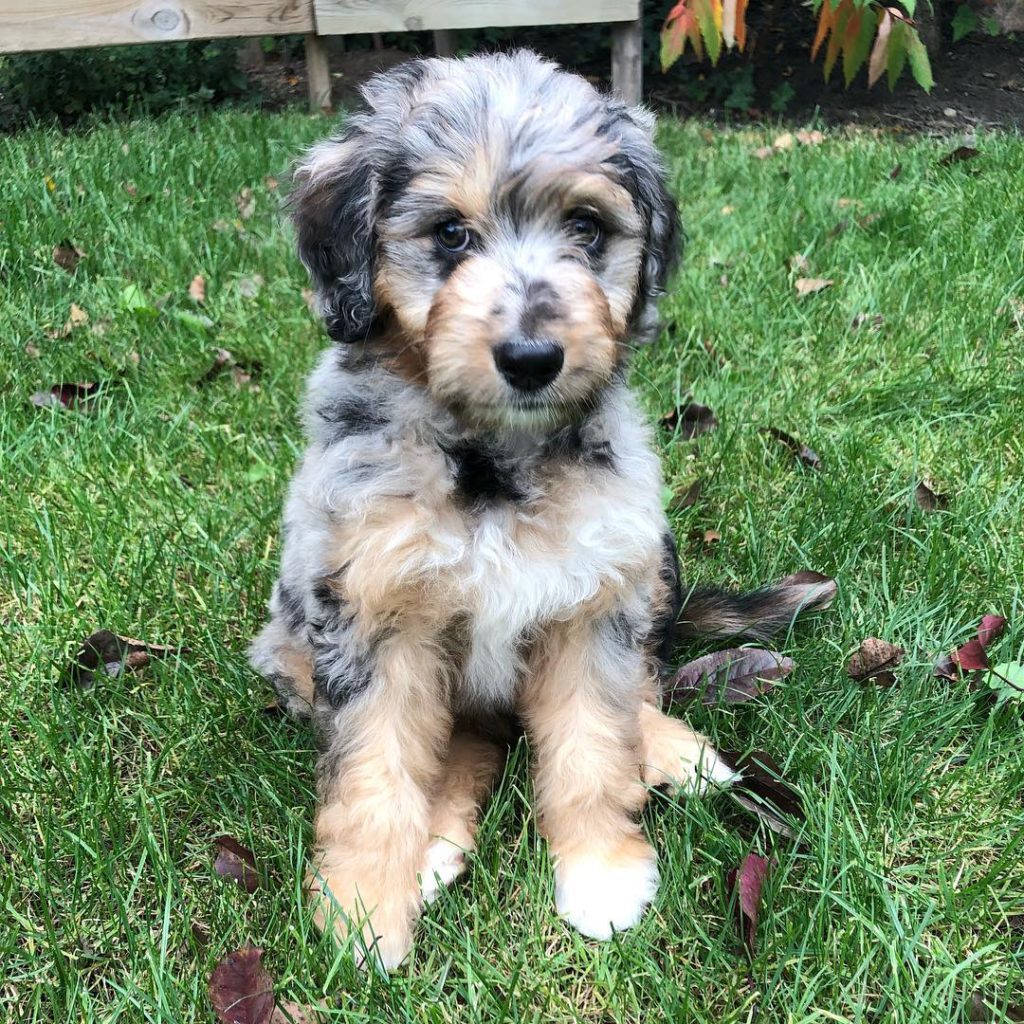 While most Aussiedoodles are thankfully healthy, there are several genetic disorders that can be inherited from either of the pedigree parents. 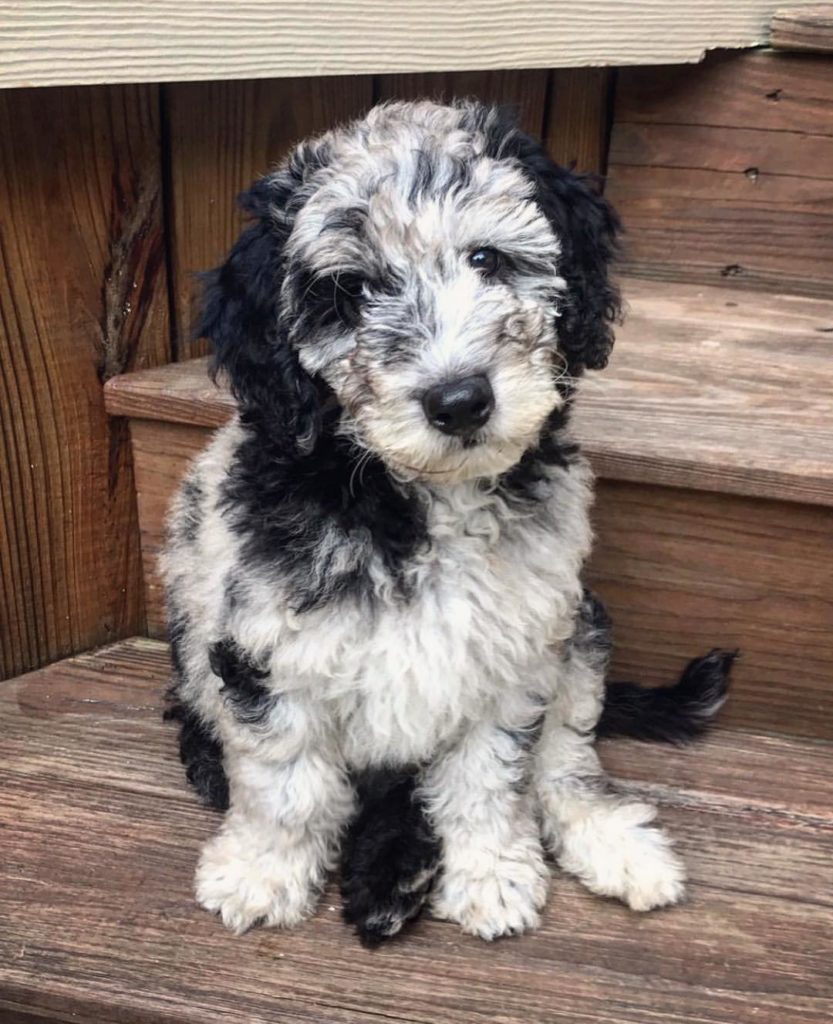 Plenty of exercise is an absolute must for the Aussiedoodle. Without it, this dog will become hyperactive, and is likely to wreak havoc on the home. Owners must budget at least ninety minutes of walking every day, but should ideally be able to fit in running, swimming, or other vigorous activities, as well.

Thankfully, this clever dog usually exhibits very good recall, and so can be allowed off-the-lead exercise, without the owner necessarily having to exert themselves to the same extent. Apart from the behavioural consequences of inactivity, Aussiedoodles can be prone to weight gain, and should also be kept to a consistent dietary regimen. 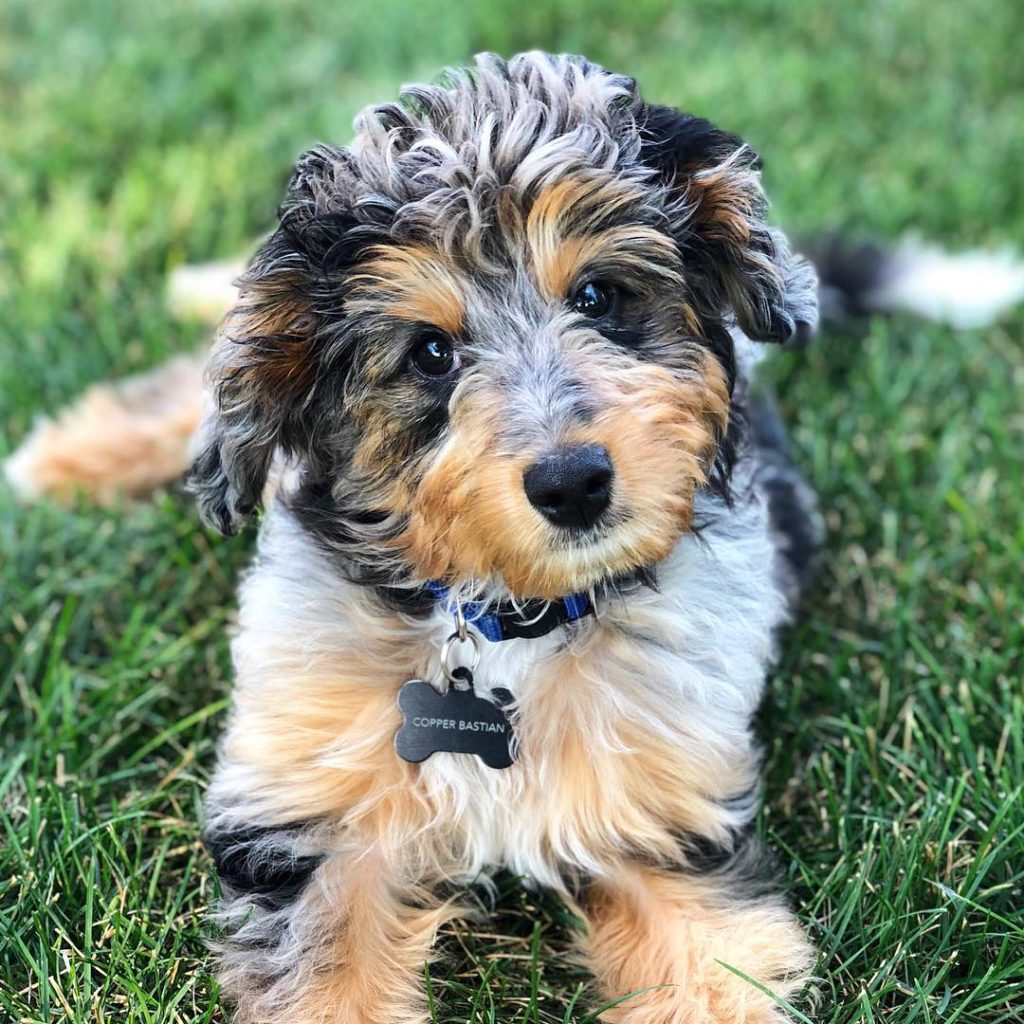 The Aussiedoodle is expected to be a light shedder, but this cannot be guaranteed, especially if the Aussie genes predominate, giving the coat a straighter character. On average, most need brushing at least every other day, and a trim around once every two months. As for any dog, nail clipping and daily tooth brushing are also essential elements of routine care. 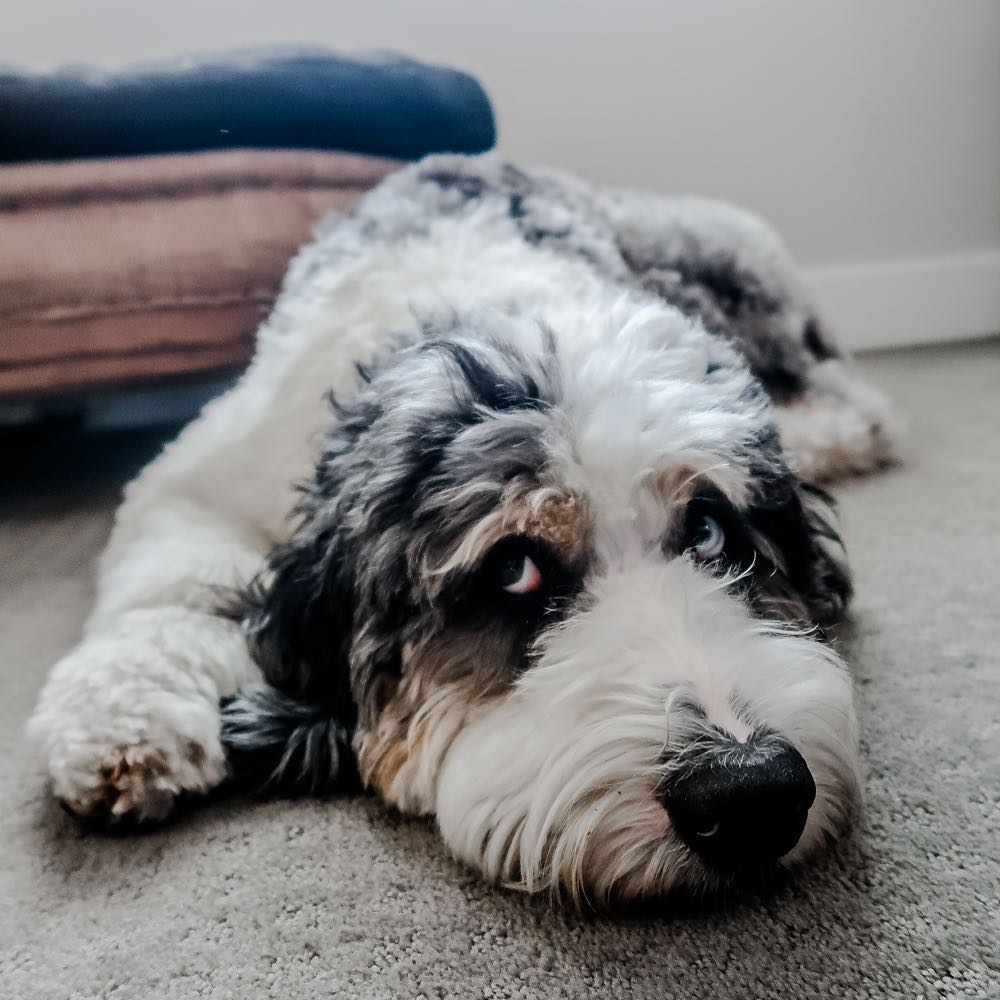 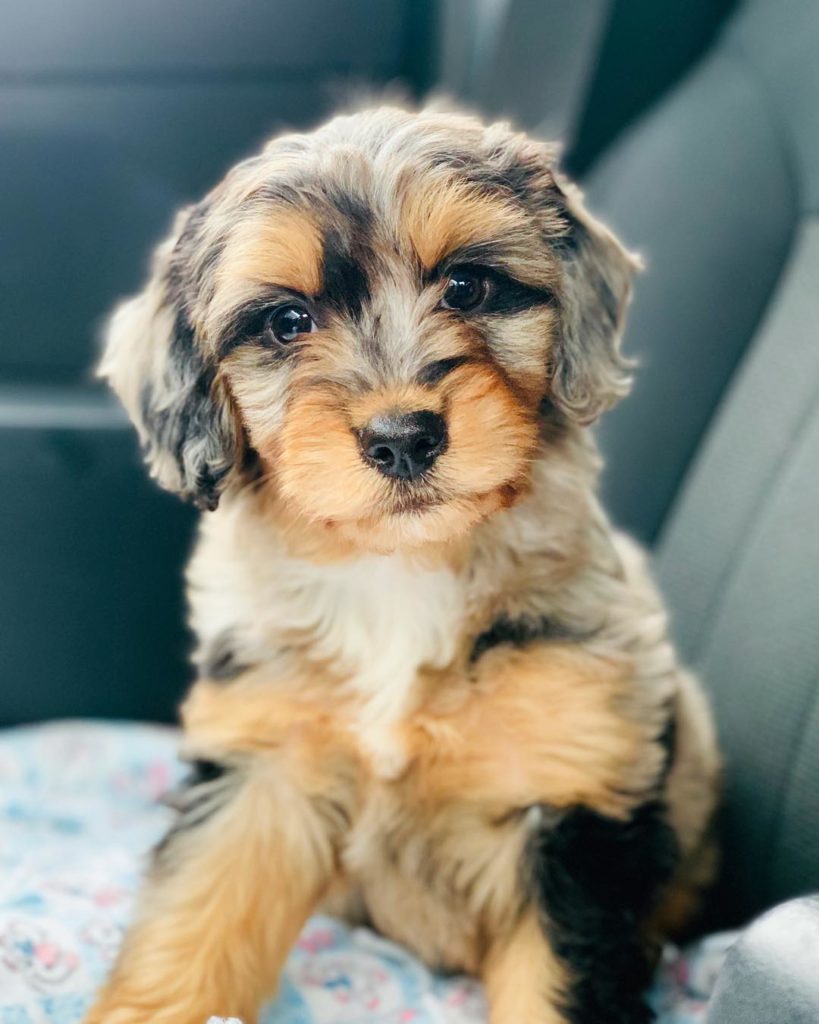 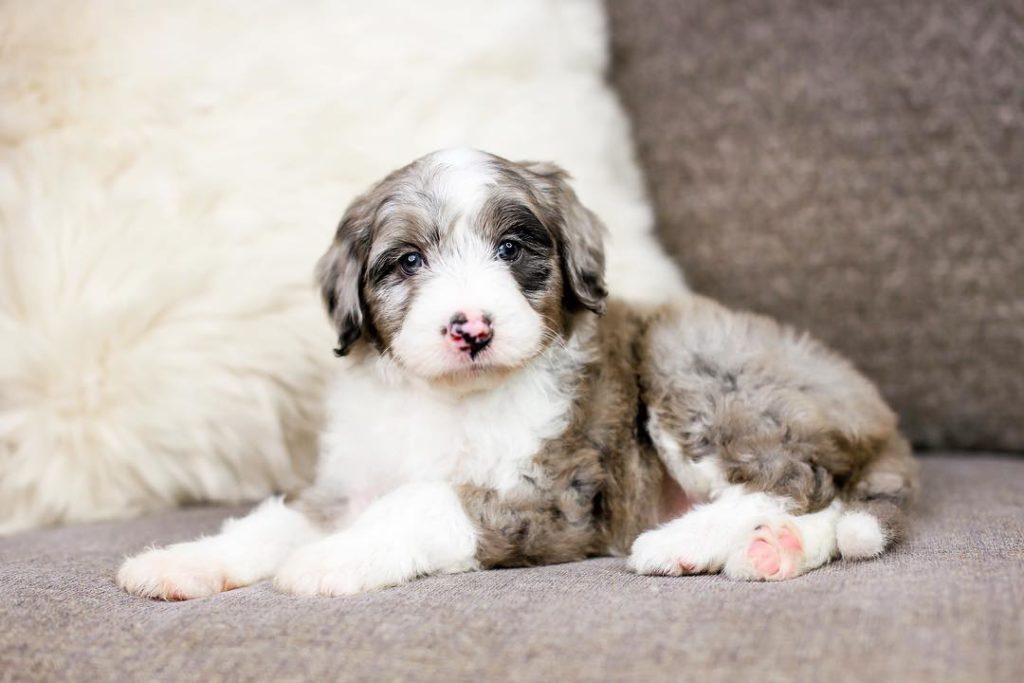 Terrified Dog Never Wagged Her Tail – Then Her Foster Father...

Terrified Cat Freed After Getting Head Trapped In Glass Jar —...

Dog Accidentally Runs Half-Marathon After Being Let Out For Pee, Finishes...

Cow Who Lost Her Mom Gets Adopted By Family Of Wild...