History of the Australian Labradoodle 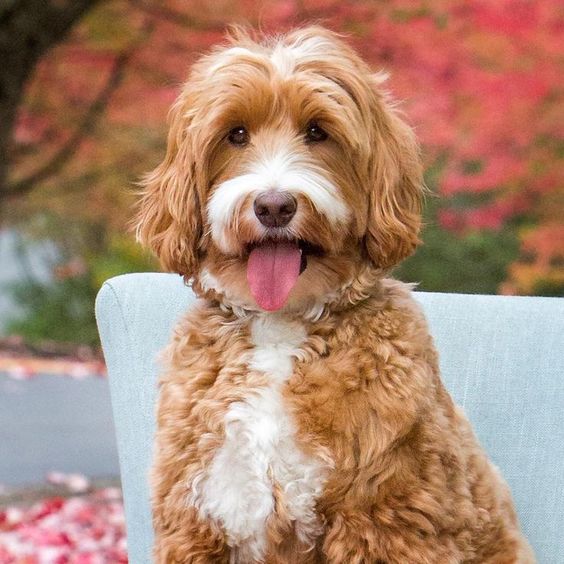 The first litter of Australian Labradoodle puppies was bred in Australia in 1989 by a man named Wally Conron, who was the breeding manager for the Guide Dog Services in Australia.
A vision impaired woman with a husband who was allergic to dogs had contacted Wally, to see if he could fulfill her request for a service dog.  After numerous breedings between Poodles and Labrador Retrievers, Wally produced a puppy with an allergy friendly coat.
This litter was the official beginning of the Labradoodle breed.
The general public became interested in these smart and easy to train dogs and their non-shedding, allergy friendly coats have played a huge part in their current success and popularity.
The Australian Labradoodle breed was further developed with the infusion of other breeds into the line such as the American and English Cocker Spaniel to add other desirable traits.  While originally developed in Australia, responsible American breeders are dedicated to the continued development of this wonderful and unique breed.

You can switch to the video version of our article and skip the long read: 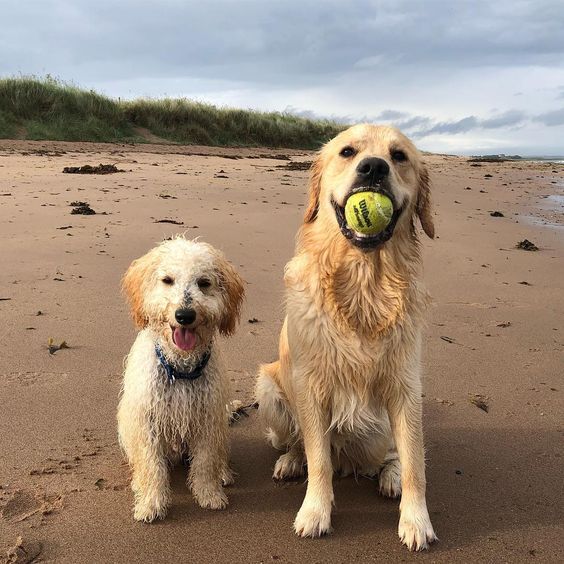 A mixed breed dog is every bit as delightful as a purebred dog, and some argue, healthier mentally and physically by virtue of hybrid-vigor.  This term refers to a mixed breed’s gene pool.  By matching two completely different breeds, it is assumed the healthy traits will be dominant, and because there are more trait options, the genetic make up of the dog is better.  The idea of the first “designer dog” actually began with the Labradoodle, and with the popularity of mixed breeds continuing to grow, there are nearly one hundred mixed breeds now to choose from.  When buying a mixed breed puppy, be sure to do your research and find a reputable breeder who adheres to the breed’s standards.  Beware of buying a puppy from a pet store and other places who may acquire dogs from puppy mills.

A Simple Explanation of the Generations of Labradoodles 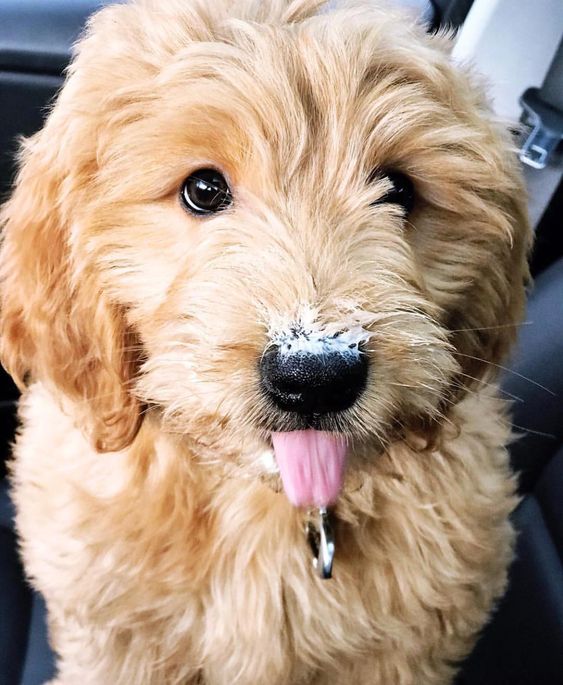 F1 or “First Cross” is a puppy from a Poodle parent and a Labrador Retriever parent.  Because this is a breeding between two dogs that do not resemble each other, these puppies have a wide variety of coats from flat hairy short coats to very woolly poodle coats.  Coats vary in length, thickness and texture and can range from completely non-shedding to shedding.  Ridgeline Labradoodles does not breed F1 puppies due to inconsistencies within the lines.
F1B or “Back Cross” is a puppy with a First Cross or a Multigen parent and a Poodle parent.  These puppies’ coats are perfected due to their Poodle parent, however the results are mixed as this is not a pairing between two like dogs.  Coats are typically low to non-shedding. Due to the variety of hair or wool coats, Ridgeline Labradoodles does not breed F1B puppies.
Multigenerational or “Multigen”  is a puppy with parents who are both Labradoodles.  A multigenerational Australian Labradoodle is a puppy with both parents who are Australian Labradoodles.  These puppies are the result of generations of breeding time and investment.  Low to no-shedding and allergy-friendly.  Ridgeline Labradoodles breeds
Australian Multigens because of the consistent quality of the puppies’ coats, appearance, and temperaments.

A Variety of Sizes and Colors 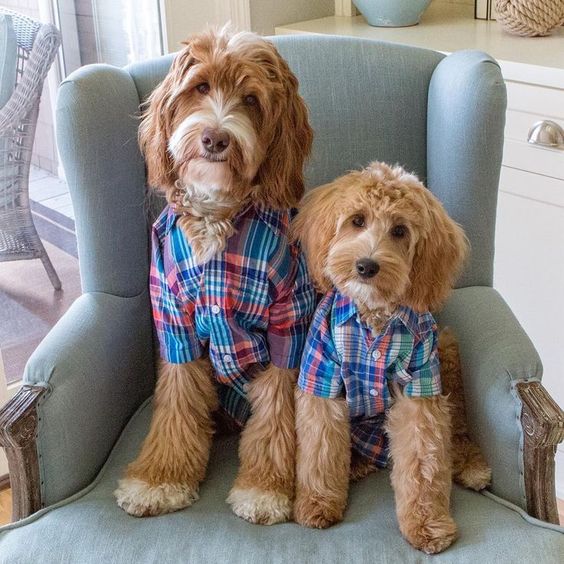 An easy way to measure your dog is to stand him sideways against a wall, then lay a pencil perpendicular across his back at the top of his shoulder, to mark the wall.  Measure from the floor up to the mark to see how tall your dog is.  You can also measure up the wall and make a mark to see how big your future puppy might be.

Two Types of Coats:
Neither type should be fuzzy or too dense.  There should be no coarse hair or a second undercoat.

1) The Fleece textured coat is a soft texture as in the Angora goat. It can have a straight wavy look or a soft spiraling curl look. It is an easy to manage textured coat.  Ridgeline Australian Labradoodle puppies have wavy fleece coats.

2) The Wool textured coat is like a lamb’s wool in texture.  It should have the appearance of looser spiraling wool which opens up easily to the skin.  It should not appear thick and dense or tightly curled.

The Many Colors of Labradoodles:

One of the many things I like about Labradoodles is the wide variety within the breed.  With different sizes, and different textured fleece and wool coats, it wouldn’t be right if they were all the same color!  Labradoodles come in many colors to suit just about anyone’s taste.  There are solid colors, and patterns such as parti, phantom, abstract, sable, brindle and multi.  There are slight variations in every color and new colors being identified.  And just to keep us guessing, puppies might fade or darken as they mature.  Check out at all these colors: white, chalk, cream, gold, apricot, caramel, buff, parchment, red, cafe, chocolate, lavender, pewter, and black! 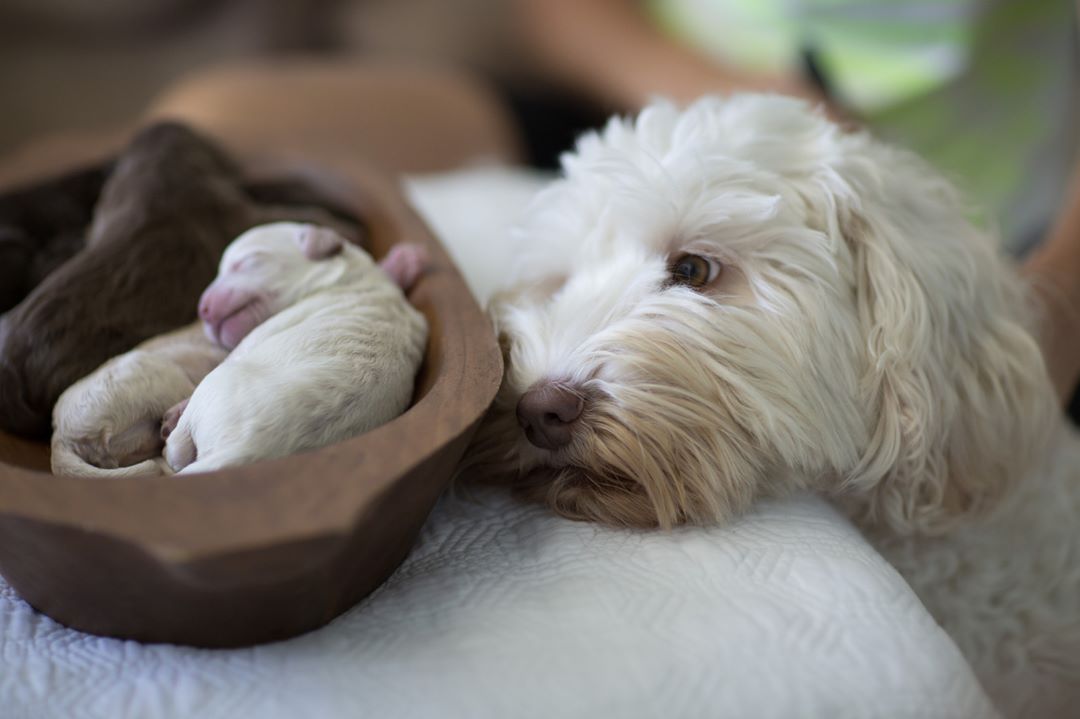 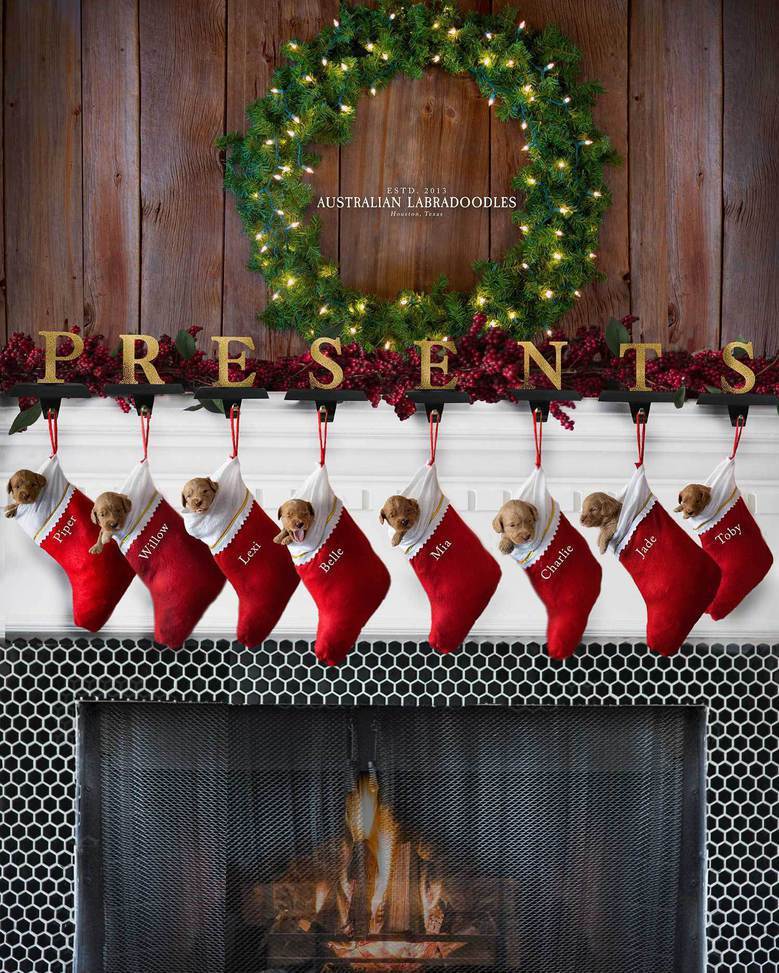 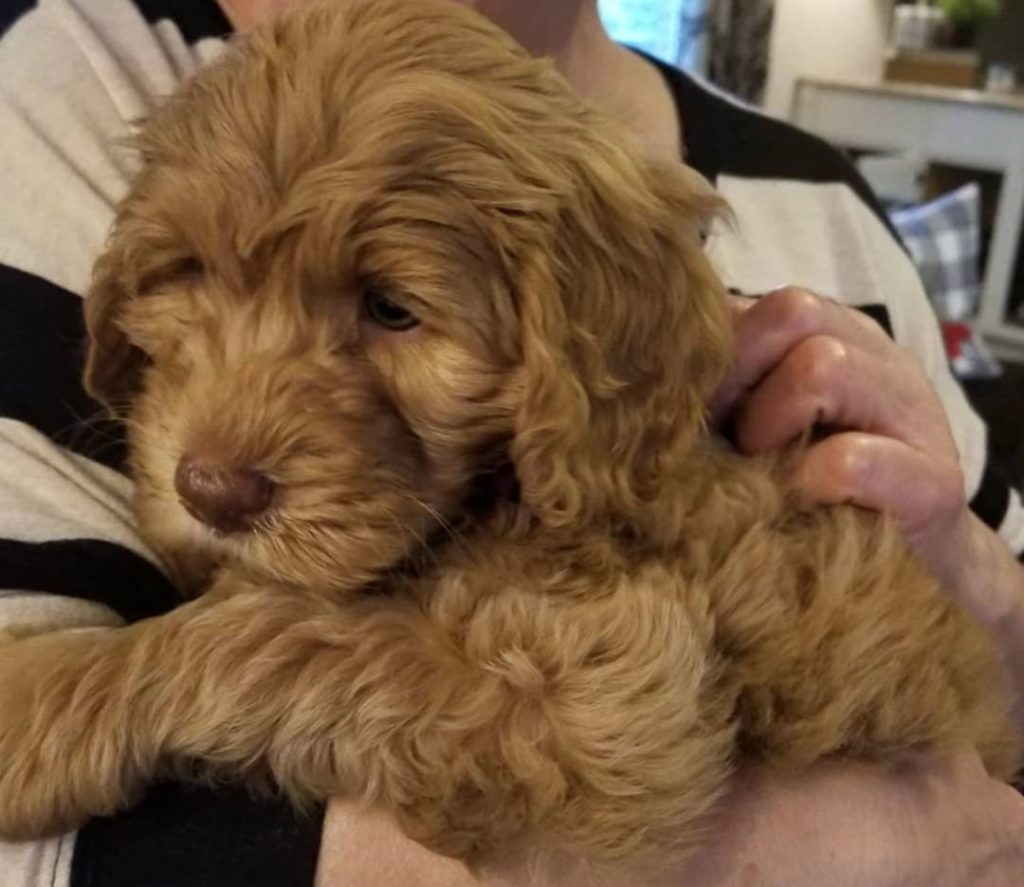 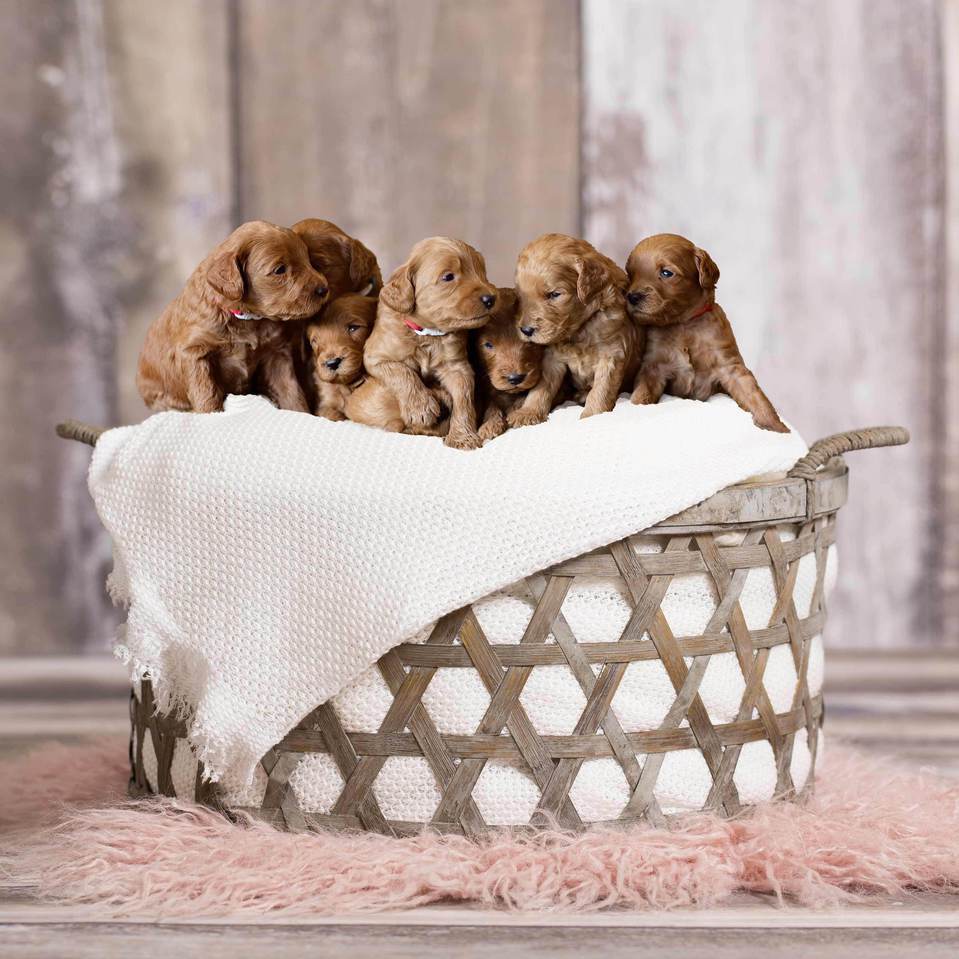 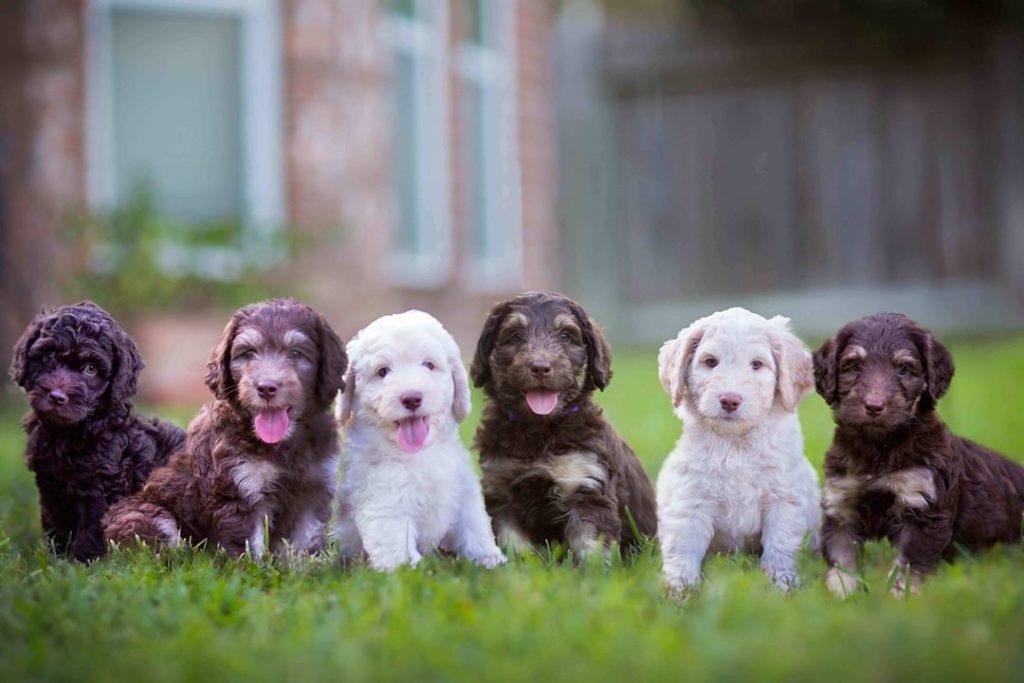 Man Decides To Adopt A Pit Bull From A Shelter, But...

60 Dogs Who Were Caught In The Act With Hilarious Results...

Bear Is Rescued After 9 Years Of Suffering – His Happiness...