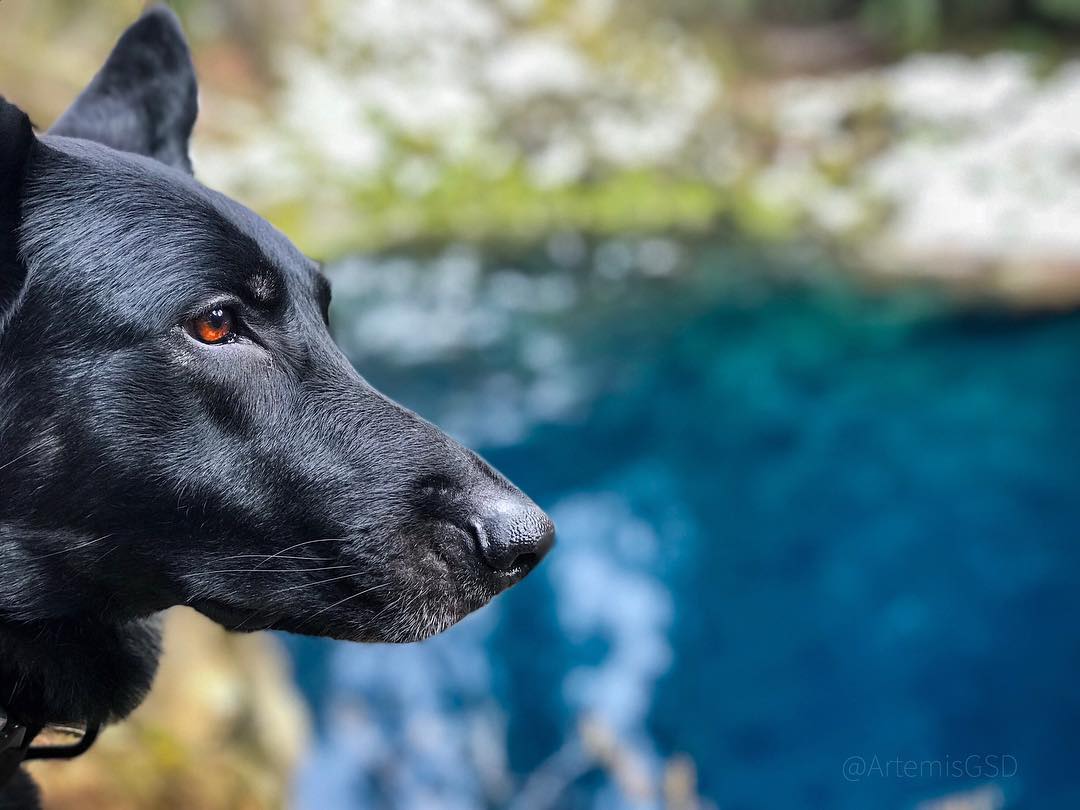 There is much to be said about the Black German Shepherd since most people hold the thought that they are different from the German shepherd.Looking at them closely you will see that they have slightresemblance in their physical appearance but they are primarily distinguished by their dark coats. There is more to this type of dog breed than just their bloodline and there are few factors that make them look like different breeds. They are excellent family companions due to their even temperament, high trainability and a uniform appearance.

He is extremely good with kids and he can become your child’s best friend provided you teach them how to handle the German shepherd. They can also get along well with other pets around your house if you introduce them at an early stage.

What to know about Black German Shepherds?

The fact that most people confuse them with the standard German shepherds makes it difficult to distinguish them. In this article, we will find out 9 things you didn’t know about the Black German shepherd.

First, it is important to know that these two are from the same dog breed and are primarily differentiated by the coat color. There are certain qualities that appear in both of the German shepherds. So, what is the same? They both have a double coat and possess a large and masculine body structure. They are heavy shredders, with straight ears and fluffy tail. However, there are some differences that distinguish the two German shepherds.

So, what is different? The Black German shepherds are designated by their solid black coat color and tend to be larger than the standard breeds. They have a straighter back and their coats may be longer with a flowing mane. It is visible around the rear of their neck. The skirting can be seen on either side of their body between the front legs and hind legs. They are also distinguished by their feathering characteristics shown by the long hair on the ears, beneath the tail and at the back of legs.

There is no mistake, as the Black German Shepherd belongs to the same breed as the standard German shepherd. Although they may appear strange from a distance, a closer look at the big dog will show some resemblance in the face and body.

Most people tend to fear this dog breed because of its striking black color. Despite the fact that you may possess a negative stigma towards this type of dog breed, their temperament is not affected by the dark color. The Black German shepherds will always be affectionate and form the habit of sticking around with their owner. Most of the time they are alert, intelligent and active and not predisposed to aggression. You tend to form a perfect bond once he is introduced to the family members and other household pets. The Black German shepherds can easily be trained because of their obedience and mostly used as police and military dogs.

They also tend to have a protective instinct and will defend you when they sense any danger. They were previously used to guard livestock and will be the best in offering you protection. Socializing your Black German shepherd from a younger age allows him to recognize that not every person is a threat and that they will receive lots of care and concern from them.

True, the Black German shepherds, like the standard dog breed are prone to health problems. They can suffer from a variety of health issues and some of the conditions include elbow dysplasia and hip dysplasia. It often occurs due to malformation of the ball and socket joints. It can also lead to lameness or even arthritis in severe cases. This condition can be addressed by maintaining a healthy weight for your shepherd. Other potential health problems include allergies, cancer, eye diseases, digestive problems, spinal disease and heart disease. It is important to make regular visits to the veterinarian with your Black German shepherd as they are in a better position to diagnose and provide the right treatment.

Before you make a decision to acquire the Black German Shepherd, it is important to know the secondary costs that may come with owning one. Some of the basic expenses include vet visits, quality foods, shots and even toy cans can also add up in the budget. You are likely to spend more if you are not ready to take proper care of your Black German shepherd. If there is no reputable breeder around your area, you are likely to pay for the shipping costs as they require proper handling until they arrive at their new home.

Hip dysplasia is a hereditary condition that even the owner cannot prevent from happening but it can be controlled. Your Black German shepherd can experience mild to severe symptoms of the hip dysplasia. Some of them include stiffness or soreness in their hips or hind legs and you might see him limping. It is advisable to contact your veterinarian if these symptoms become visible. The veterinarian can confirm or deny the presence of this condition in your shepherd after a thorough examination such as manual tests, physical examination and use of radiographs.

Since the hip dysplasia is known to be hereditary, the veterinarian will give you pieces of advice on how you can take care of your Black German shepherd. Some of the ways in which you can control this condition is by giving him a change in diet, prescription pain relievers, joint supplements, massage and surgical options. Giving him a balanced diet rich in nutrients will be essential in boosting your dog’s immune system and improving their overall health.

Whereas a human bite if just 86 pounds of force, the Black German Shepherd can bite with a force of up to 236 pounds. It is one of the reasons why this dog breed makes excellent police dogs. It is often said that you cannot run from the German shepherd more than once. They have strong and masculine body structure which makes them capable of bringing down any person who tends to run away when used as police dogs. They are obedient and loyal and would always follow orders from their owner.

This type of dog breed will not hesitate to protect one of their pack members. With proper training, the Black German Shepherd senses danger and alerts you of intruders. They tend to protect their family, more so the children. It is important to teach your dog when to bark and who is considered a stranger in your homestead. A good bred Black German Shepherd

will always attack when given orders, provided it is necessary. They have a sharp sense of hearing and sniffing which makes them the best dog breeds for police and military.They are also very intelligent and came third in the rankings when AKC judges rated more than 100 breeds regarding their intelligence.

TheBlack German shepherd will do whatever it takes to protect their people and keep them safe. Strong protective instincts has always been a hallmark of the shepherd dogs. It is essential to ensure that they have a proper socialization from the time they are introduced in the family. Starting as puppies, the Black German Shepherd will grow up comfortable knowing who is considered to be a stranger. A sport was developed in the 19000s to test the character trait of the German shepherds. The Schutzhund was its German name and it meant “Protection Dog” when translated to English.

Most owners of the Black German Shepherd will tell you that work ethic is what sets this dog breed apart. Just like the standard shepherds, the Black German Shepherds prefer challenging jobs to thrive and will always be treasured by their owners. The energy level of this breed has been described as “Volcanic” and the generations of their ancestors used to work every day. They were used for herding and would also guard the livestock in all-weather terrains. It is one of the primary reasons why the Black German shepherds are favored when it comes to the toughest jobs like apprehending criminals or searching for disaster survivors in a smoking rubble.

One of their hobbies is heroism and they would always dash through the wilderness to get help. A Black German Shepherd will even take a bullet for their owners. It is important to provide them with a proper training so as to keep them safe from harm despite offering you protection.

The Black German Shepherd are liked for their loyalty, great energy and affection towards children and members of the family. However, they cannot live indoors forever which means that they also need to spend time outdoors and have interact with nature. The primary distinguishing factor between the Black German shepherd and the standard breed is that they have black coats. Their puppies are born black and they tend to be larger than the normal German Shepherds. They are also prone to health problems and the owner is highly responsible for taking good care of their dogs.

It is necessary that you observe the right feeding schedule. The Black German shepherd need a balanced diet with essential nutrients that are required in the body. It not only boosts their immune system but also improves their overall health. Black German Shepherds have been used as police and military dogs because of their protective and heroic nature. They are swift at night because of their dark coats and are likely to catch an intruder unawares. If you want to own the Black German Shepherd, ensure that he is properly trained and provided great care.They always make the best family companions.

5 Interesting Facts About The Finnish Lapphund

7 Things To Know Before Getting An Alaskan Malamute